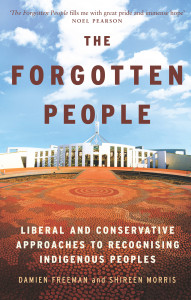 The Forgotten People is published by Melbourne University Press.

This collection of fourteen essays is edited by Damien Freeman and Shireen Morris, and published with a foreword by Noel Pearson.

Praise for The Forgotten People

“The Forgotten People is a further important contribution to this debate. It signals an ongoing commitment and intellectual contribution by a leading cast of conservative figures to the goal of changing the Australian Constitution to recognise indigenous peoples.”

“I read The Forgotten People with enthusiasm.  Shireen and Damien have achieved something noteworthy here.  They identified that strong leadership and support for indigenous affairs and indigenous recognition has often come from the conservative side of politics…”

“It’s long overdue for arrivals to Australia over the last 200 years to recognise the majesty of 40-60,000 years of civilization of our indigenous people, and this book sets the pathway to achieve this objective.”

“This book … is a wonderful building block because it brings together some people that you would not expect to support constitutional change, to a position where they either support or they are prepared to consider…”

“The Forgotten People fills me with great pride and immense hope that a broader consensus among all Australians may yet emerge. It is the result of genuine engagement with the right.”

“The Forgotten People is a marvellous collection of considered and passionate responses from leading Australians about how indigenous people might be recognised in our Constitution. Whether you agree with the proposals or not, each demands our own thoughtful attention and reflection. Only by considering all the different proposals can we hope to settle on the right way forward.”

“Symbolism is important in law and life. More tokenism is empty. The problem with many proposals for a symbolic acknowledgment of Australia’s Aboriginal people in our Constitution is that many supporters want it to be purely symbolic. Some even propose an express disclaimer of any legal consequences. The authors of The Forgotten People correctly insist that the pathway between symbolism and tokenism demands respectful consultation with Aboriginal Australians themselves. Nothing less will do. A most timely book.”

“Reconciliation generally refers to unity and respect between Indigenous and non-Indigenous Australians. This collection draws attention to the need for another kind of reconciliation: between the political right and left on constitutional recognition of Indigenous peoples.”

About The Forgotten People

It is easy to assume that constitutional recognition of indigenous Australians is a project of the left in Australia, and something that the right staunchly opposes.

This collection challenges that assumption. It frames indigenous constitutional recognition in the context of conservative and liberal philosophical thought, and demonstrates that there may indeed be a set of reforms for constitutional recognition that can achieve the symbolic and substantive change sought by indigenous leaders, while at the same time addressing the critical concerns of constitutional conservatives and classical liberals. More than that, this collection demonstrates the genuine goodwill that many Australians share for the cause of indigenous recognition that is both practically useful and symbolically powerful.

Noel Pearson’s compelling foreword provides the political context to the challenge at hand.

The Forgotten People develops a set of arguments showing that the need to recognise indigenous Australians is compatible with the need to uphold the Australian Constitution. It is an invitation to right-wing thinkers to engage with issues of great national significance at a critical moment in the current political debate.

The book addresses the need for substantive reform as well as symbolic reform.

The Forgotten People includes chapters by the following contributors:

The book was launched by the Hon. Jeff Kennett AC, former Premier of Victoria, at a reception hosted by the Lord Mayor of Melbourne in the Town Hall’s Yarra Room on 1 June 2016.