“Freeman’s aim has been to leave his readers with ‘the tone’ of a friend who was not a great man but was passionate, inspirational and authentic. He has succeeded.”

“It wasn’t folly to speak against the errors of these times, as Roddy did. It is our duty to speak out against that which diminishes us, although it helps to see the good as well as the ill in the times in which we live. Thanks to Damien Freeman, Roddy Meagher is with us yet: to inform, to amuse and to teach.”

“[Freeman] contends that his subject has ‘intrinsic significance’. By book’s end, I had come to agree with Freeman. Meagher’s story is surprisingly multifaceted and Freeman tells it fairly and well… as Freeman ably demonstrates, Meagher was a unique and important Australian.”

“What I most like about the book is that it is much more than a biography. Much of it involves philosophical discussions about the value of art, the significance of equity law, and the role of universities… I enjoyed Roddy’s Folly and it is certainly a book I will go back to.”

“[Freeman] has used Meagher’s life as a basis for some extended essays on art, the idea of the university, religious belief, marriage and the standard text on the law of equity (of which Meagher was a co-author). This is, of course, a novel approach to biography … but anyone who is interested in Meagher is likely to enjoy this material as well… His life provides an intriguing glimpse into the small and sometimes strange world of the law.”

“No-one will ever appreciate the whole truth about Rod Meagher. Although this book is in a sense only one perception of it, it is an acute and rich perception… Readers will be deeply grateful to Damien Freeman for his labours and his reflections on the magnificence of that astonishing subject.”

“Above all, he is a very interesting character. Australia is full of rather boring people. Roddy Meagher was never one of them… Damien Freeman feels affection for the subject; but is not blinded to his human foibles. (Even I have them).”

Roddy Meagher’s legacy as barrister, scholar, wit, and aesthete is legendary. When he retired from the New South Wales Court of Appeal, the Chief Justice, Jim Spigelman, praised him as “the most widely loved judge of his time” and “one of the intellectual giants of our legal history”.

Freeman’s biography is the first book-length study of R. P. Meagher QC. It considers his relationship with the Roman Catholic Church, the University of Sydney, the Australian Bar, and the tradition of legal scholarship to which he made a monumental contribution. In doing so, Freeman tries to get inside the mind of the man, and offers an analysis of Meagher’s attitude to feminism and political correctness, as well as his place in Sydney’s bohemian and establishment circles. This discussion is set within an account of his marriage to the painter, Penny Meagher, and the central place of art in their life together: for her as artist; for him as art collector.

Michael Kirby’s humorous sketches of the view from the Bench were sketched by him in court and presented to Meagher when the two judges sat together. These previously unpublished sketches are reproduced for the first time in Roddy’s Folly, shedding light on the lighter side of life on the Bench.

The book was launched by the Hon. Tony Abbott MHR at the Old Sydney Law School on 23 April, 2012.

Freeman has been invited to speak about Roddy’s Folly at a number of events.

A number of other articles shed further light on the book’s author, its subject, and illustrator. 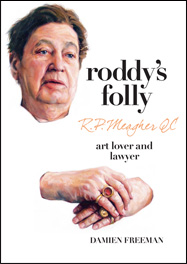