Freeman has maintained an enduring interest in the performing arts and the visual arts. His practise as an artist has included performer, composer, draughtsman, printmaker, and sculptor. He has also dabbled in writing (unpublished) novels and poetry.

As a timpanist and percussionist, he has performed with many professional and amateur orchestras in London, Cambridge, and Sydney, and in venues ranging from town halls and college chapels to the Sydney Opera House. He has primarily performed symphonic repertoire, and personal highlights include:

At the University of Sydney, he was a member of the University’s gamelan. He also spent some time with his lips pursed around an oboe reed to no particular avail.

Of all his creative interests, composing has been his deepest. He has written pieces for different combinations of instruments and voices, with an emphasis on percussion (including the influence of gamelan music), and an interest in the compositional technique of twelve-tone composition (or serialism), particularly in the music of Anton Webern. Examples of his compositions include the following:

He began composing at high school, and examples of compositions he wrote for the Higher School Certificate include the following:

He has also continued to experiment with a range of different media in the visual arts: 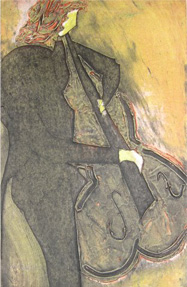